It’s been a while since we have had some time to give everyone an update on the happenings here at Primus Racing but we haven’t forgotten about you!

About a month ago (seems like only days ago) our 2017 F4 season began at Homestead-Miami Speedway in sunny South Florida. Months of preparation, countless hours of improvement and testing all lead up to this weekend. The first weekend is always crucial in a very close championship as it sets the tone for the season; will you have a hole to dig out of, will you come out on top…All questions we were ready to answer.

The weekend began with a Promoters Test Day and allowed the team to shake the cars down during several install laps and start going through a few items for verification from testing. The test day went well and the team felt confident going into qualifying.

Qualifying began as normal with the drivers getting an initial feel for the changes that were made overnight and ensuring the balance was where they liked it before pushing hard on the new Pirelli tires! The team worked bit-by-bit to improve the car throughout the session and a mixed result came of it. Jim Goughary was able to qualify 10th, a very strong result for the team. Austin McCusker struggled with traffic during the session and could not string together a clean lap, placing him in 24th. Not an impossible challenge to win from either position but we all knew it would be a fight!

Race 1 began later that day with a similar feeling to the end of qualifying. Jim in his #4 Primus Racing machine, was able to make a great start and lunge hard on the brakes into turn 2 to pass a total of 6 cars in the first lap! Austin, being further back, knew the first lap would be a difficult one to come out of unscathed. Heading into turn 3 the field rapidly checked up causing Austin to hit the rear of another driver and badly damage his front wing. The team closely monitored the damage and the lap times and determined it was safe to leave Austin on track to attempt to improve his position. Meanwhile, Jim was battling hard for a spot on the podium. Every few laps the train of cars from 2nd to 5th would swap positions as the used the draft down the front straight. Unfortunately, all this battling allowed the leader to pull away a slight bit as each lap passed. The field finally started to separate and Jim was able to hang on to the 4th position to bring home a really solid result to start the year off with! Austin was able to finish the race despite the damage and came home in P22.

The team was able to repair the #5 car overnight and several changes were made to both cars in preparation for races 2 & 3. Race 2 starting positions were based on fastest laps from Race 1, this placed Jim P5 and Austin P30 after receiving a 10-grid spot penalty. Austin had a much better start to Race 2 but encountered some minor front wing damage again during the very close battles for position. Austin was able to improve 10 positions to finish 20th. Jim had another hard fought battle at the front, constantly drafting and being drafted by, this time he came out in 5th, another solid, points paying finish.

Race 3 began just about an hour after Race 2 which created a whole different race in the paddock as the teams worked frantically to repair damages, debrief with their drivers, and make and changes to the cars. Primus Racing was able to get all the work done in time and the cars rolled to the grid to start P4 (Jim) and P24 (Austin). 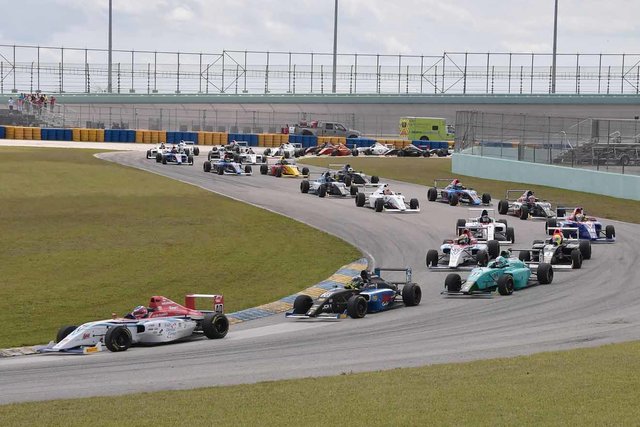 Both drivers got off to strong starts and were both in good positions to improve. An early safety car allowed us to re-group and give the drivers another change to make some moves on the restart. Everyone in the 33 car field was paying attention as the green flag flew yet again. Jim was making solid progress until another driver made a very optimistic move down the inside of turn 2 and hit the left rear corner of Jim’s car, sending him off track. Jim was able to keep the car gathered up but fell to 11th in the process. Austin continued to maintain a solid, consistent pace and was clicking off positions one-by-one. Jim was able to fight back to finish 8th, keeping his streak alive as )the only driver to score points in every single F4 U.S. race to date (18 events as of 5/16/2017). Austin was able to improve to finish 16th, his best result of the weekend. Despite not scoring any points Austin kept his head help high and knew where he weekend went wrong and what we needed to do to improve!

The team has been working hard on everything from logistics to car prep for the past month as we prepare to race at the famed Indianapolis Motor Speedway! Be sure to stay tuned in the coming weeks as we will keep you all up to date with the schedule as well as any other information about the weekend in Indy!